Popular songs for the mandolin or the tenor banjo in GDAE.
Most people, including musicians associate certain musical instruments with the playing of a particular genre of song. The reason is beyond me. I can't see any reason why any genre of music can't be played on a mandolin / banjo.
Over the years there have being some pop singers who included the mandolin on their songs, such as Rod Stewart with Maggie May and REM with Losing My Religion and you'll often hear mandolin players playing these songs, but it's as if famous singers have to record a song that includes the mandolin before they'll play that song.

Over on my other website for tin whistle, I included over a hundred pop songs and since I did the musicians who go there no longer only play folk songs on their tin whistle but now include a rake of good pop songs.
That's one of the things I want to accomplish on this site.

PDF Ebooks
Below is the list of popular song tabs for mandolin / Tenor banjo.
There are several ebooks of sheet music tabs in the package which include a great mix
of pop, rock and folk songs. About 500 songs in total.
The price is €7.90 and I'll email the links to you for downloading. GDAE Tuning.

The fretboard on the tenor banjo or mandolin.
Included in this section also are the letter notes which are very handy for those who play recorder or the flute. The banjo chart above says how these notes work. The very low notes with the comma after them are seldom used on this site as I like to keep s many songs as possible mid range.

​I'll continue to add banjo tabs to this section. If you have any requests then please let me know. Most banjo players who arrive at this page are probably surprised to find this kind of music here that's worked out for the mandolin / banjo. That's because a lot of players don't think of playing pop songs on their mandolin or banjo and tend to stick with the same stuff year after year not realising that that musical instrument sitting in the corners is capable of playing millions of songs and tunes in every category of music you can think of, be it pop, country jazz or folk.

Learning songs. Years ago when I first started to learn songs I'd buy song books, no internet in them years, I'd buy loads of sheet music books and flick from one song to the next never really learning how to play many songs off by heart. It's a trap many musicians starting off fall into. My advise is to find a song you like and stick with it until you learn it off by heart before moving to the next song. It's better to know just one tune off by heart than bits and pieces of a hundred songs. And when you do know it inside out, don't just leave it there and say to yourself, ''well at least I know that song now'' , you need to keep in touch with songs and play them regularly or you will forget them. 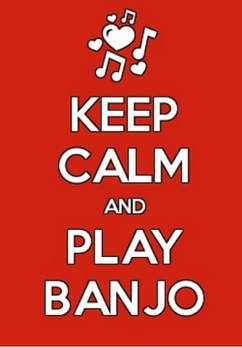 If you tune Irish and finger the bottom two strings with your thumb, the tenor becomes a simple high bass/rhythm instrument for acoustic singaround use. Slide around. Strum with your thumb most of the time. Switch to a pick if you need volume. Played against guitars/mandolins/fiddles you can do things they can’t.

Try this on The Kinks “Tired of Waiting for You” or Setzer’s “Stray Cat Strut” or Petty’s “Free Fallin’ ” or Cobain’s “Come as You Are” and see what you get. This is not showy flatpick work, nor is it chopchording. It’s grunt work that drives the group, and is simple enough for me to do the lead singing.

I’m doing this on an Orpheum No 1 with a sock mute under the dowel stick. Without that it’s bright, buzzy and loud.

All this may sound bogus, but listen to St Cyr playing the tenor as a walking bass on King Oliver’s Canal Street Blues.

​What you're doing when you play open fifth "thumb-bass" this way is vamping. At first it's hard to sing melody while playing an Andalusian or other down cadence (such as in "Sultans of Swing" or "Sunny Afternoon") but it gets simpler with practice. I walked away from "Werewolves of London" for a month, tried again, and it clicked just in time for Halloween.
Drumming on the snare-like head is good accompaniment for a group with lots of string players.. Thumb whacking the rim on the metal tone ring produces a sound like a steel drum.

-Straight-up 5 string fingerpick banjo tunes like Reuben's Train and East Carolina Blues are good on the tenor, even without the drone string. Same goes for Woody Guthrie tunes.

-My new challenge is reggae....I Can See Clearly Now and Down Under....you really need some drums for the rocksteady afterbeat though. Jimmy Buffett tunes fall close to reggae for a Caribbean sound too.

​About six months ago I was watching a Youtube video of Richard Thompson playing She Moves Through the Fair. On the last verse he started striking the guitar strings above the bridge with his fingers, which produced an eerie almost ghostly chord sound....

The effect is entirely different on a tenor banjo. It allows drumming on the head while simultaneously producing quiet chord sounds. This releases the possibility of playing a lot of songs which were tricky or impossible with strumming or picking. Songs like Louie Louie, Can't Explain, Every Day Is A Winding Road, Going Up The Country and Go Your Own Way suddenly "work".

The other area I've enjoyed exploring is the jazz heritage of the tenor banjo. This instrument was created to play 20's standards like It Had To Be You and On The Alamo. It also works well for later jazz standards like I Left My Heart In San Francisco, Alison and I Can't Make You Love Me.

I've also upgraded to an Orpheum No 3. Easier action that the No 1.

Hi, from Dan
I just wanted to thank you for an awesome site. For some reason I decided to learn to play the tenor banjo, and this site makes it so much more fun and rewarding. Finding songs I recognise and want to play, and actually learning them.

Thanks !!
Dan
And thank you Dan for the kind words.
From Chris
Just found your website, I'm of the same mind as yourself regarding trad tunes and like yourself I prefer songs. I also love the same music as yourself.

I play fiddle (not well) and discovered that using mandolin tab in conjunction with some tape on the fiddle neck gives me frets and makes learning tunes much easier than trying to learn music notes.
Anyway mi wanted to say thank you for a great site, for great music the playable way.
Kind regards
Chris