My Heart Will Go On Mandolin And Banjo Notes

This popular song is for the 4 string Irish tenor banjo or mandolin. The first tab is in the standard mandolin tuning of GDAE and the second tab is in CGDA Tuning. That second tab will also suit the tenor mandola, cello or the viola.This is generally not a song you'd hear played on a banjo or mandolin but have included it as it's so well known and very easy for those starting out on the banjo. I have even included some banjo letter notes to help you along. The music is in the key of G. On my other website which includes tin whistle notes for this song, it's become one of the most popular for whistle players, this is only because a whistle was used in recording the song for the film Titanic. If a banjo or  had of being used in the main theme of the film then this banjo version would be very popular. People follow like sheep, most people seldom lead. People expect a certain song to be played using a certain instrument just because a certain instrument was used in the original version and woe be tide if you dare play, for example ''My Heart Will Go On'' on a tenor banjo or mandolin. They'll look at ye as if you've two heads. 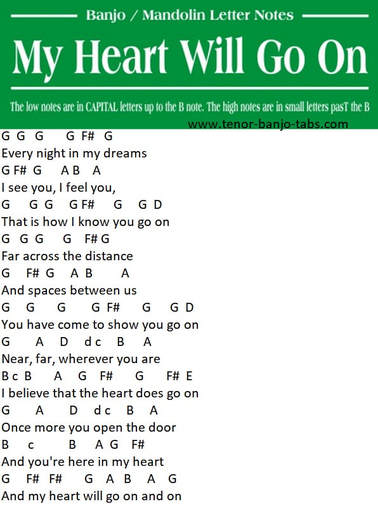 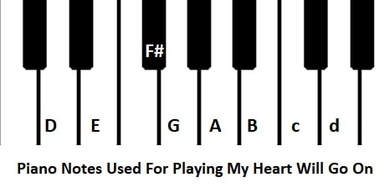 My Heart Will Go On Tuning Of CGDA. This tab suits the mandolin, tenor banjo, the tenor mandola, viola and cello. 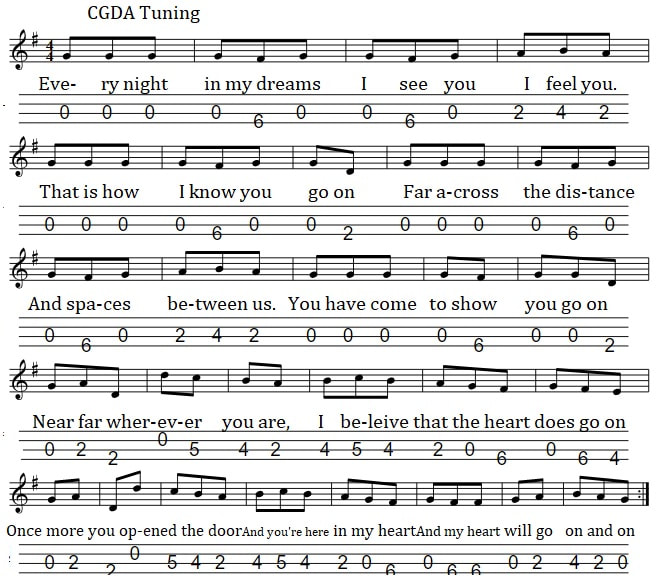 ​Below is the sheet music list of all the tabs in the pdf ebook of pop songs, which includes the free ebook. Price €7.90.
I'll email the download link after purchase .GDAE Tuning