​My Bonnie Lies Over The Ocean Banjo / Mandolin Tab

My Bonnie Lies Over The Ocean Mandolin And Tenor Banjo Tab Along With The Beginner Easy Notes.
This is an old Scottish folk song about bonnie prince Charlie. It was very popular as a children's song years ago. It fact it's a love song.I'd say the reason it became popular is because the tune is very nice to listen to and also easy to play. I also thought it was a kids song at one stage, but I later learned it was about Bonnie Prince Charlie of Scotland. Included are the easy to play banjo letter notes for beginners and five string players. That second mandolin tab is in tuning of CGDA. 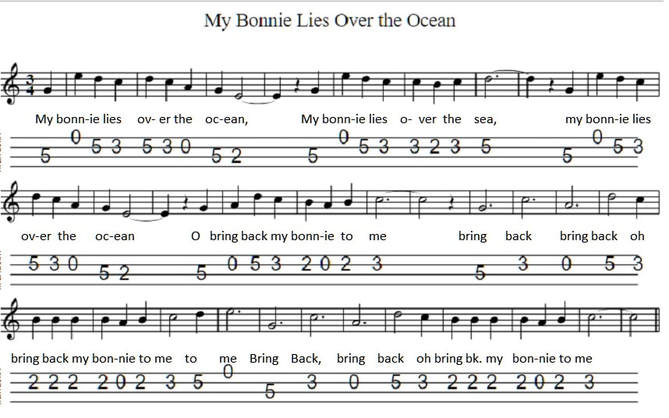 Scottish song My Bonnie Lies Over The Ocean sheet music for mandolin and tenor banjo.
​​Below is the list of songs [ tabs ] included in the Mandolin ebooks. The price is €7.90
and I'll email the download links after payment. Standard tuning GDAE,
You'll receive every song listed below which is around 500 and a mix of folk, ballads, pop and rock.
Now including a free Beatles ebook of songs and another of Irish rebel songs plus Christmas songs and hymns.
Also included is a 500 page ebook of lyrics and chords for the mandolin / tenor banjo in 3 different easy keys.
Martin 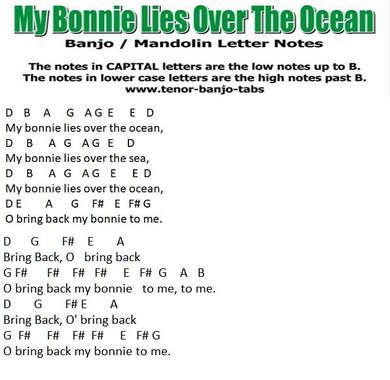 Easy to play version of My Bonnie Lies Over The Ocean letter notes.
The version of the mandolin tab above is in GDAE Tuning and the one below's in CGDA. 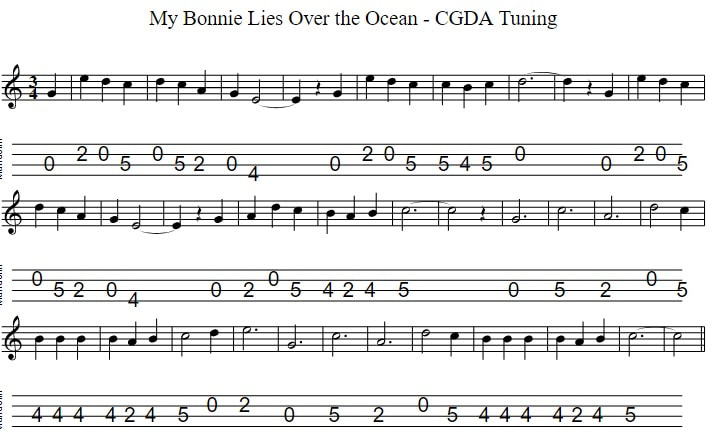